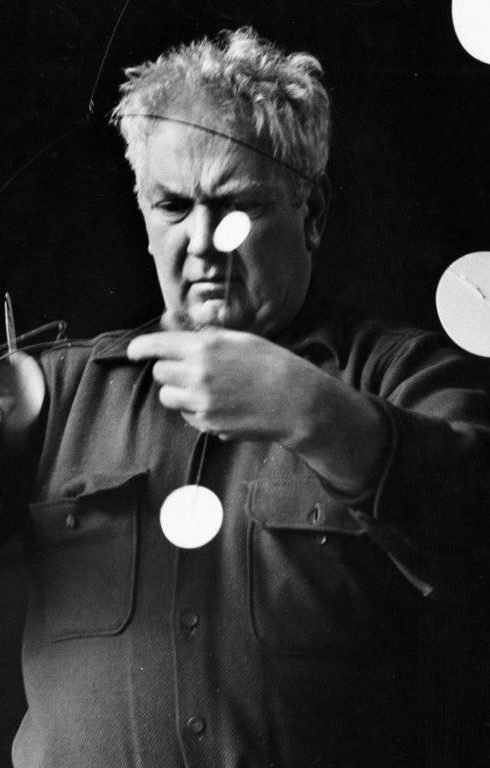 Born in a family of artists, Alexander Calder sculpted, painted and drew since he was a child. In 1923, four years after finishing his studies in mechanical engineering, he went to New York to study art. He attended classes in painting and drawing at the Art Students League and began working as an illustrator.

In 1926 he moved to Paris, where he started sculpting with wire. Enthused by the Parisian avant-garde, he created modern designed small mechanical pieces that represented a circus show. The dynamic character of this work would determine Calder’s career. In the early 1930s, Calder began his experiments in the field of abstraction, first as a painter and then as a sculptor. He was greatly influenced by European abstract artists such as Joan Miró, Jean Arp, and Piet Mondrian. He also experimented with movement, which led him to develop the two modes of sculpture for which he was famous, the mobile and the stable (stábile). In 1931, he created his first kinetic sculptures using motors and connecting rods, although he soon replaced this mechanism with pieces suspended with wires that moved delicately. Also, at that time, he experimented with jewelry and invented various mechanisms to introduce movement into his sculptures

Although his stone, wood, and bronze sculptures, as well as his drawings and paintings (mostly gouaches) from the late period, are important, Calder’s reputation is mainly due to his motives and stables. These increasingly large works achieved an enthusiastic popular acceptance rarely achieved by abstract art, leading to numerous commissions after World War II. Huge stable and mobile works made by Calder can be found in dozens of squares and public buildings in Brussels, Chicago, Mexico City, Venezuela, Montreal, New York, and many other cities. The culmination of all of them is his latest work: the giant red and white mobile (1976) suspended in the central courtyard of the east wing of the National Gallery of Art in Washington.

Calder died on November 11, 1976, in New York, just after overseeing the mounting of the largest retrospective exhibition of his work at the Whitney Museum of American Art.