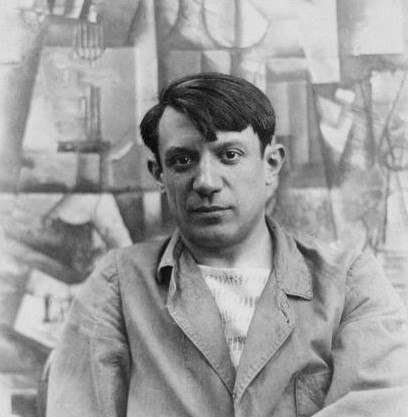 Pablo Picasso was a Spanish painter, sculptor, and creator of the art movement known as Cubism, along with Georges Braque. Picasso is, without a doubt, one of the most famous plastic artists in the world, participating in many artistic movements that spread throughout the world and exerting a great influence on the great artists of the time.

Pablo Ruiz Picasso was born in Malaga in 1881 and died in Mougins, France at the age of 91. From a young age, he felt an attraction to painting and drawing thanks to the influence of his father, artist José Ruiz Blasco. Due to his father’s work he lived in several cities until he settled in Barcelona, where he attended the School of Fine Arts. While studying there, he explored different artistic movements as well as continuing to draw one of the most characteristic elements of his work, doves. He also surrounded himself with artists and writers who sparkled in him a deep desire to explore his inner world and scrutinize what was happening around him in order to capture it on a canvas.

One of the moments that deeply affected his life and career was the suicide of his friend Carles Casagemas, Picasso’s work tended towards blue and dark colors, in what is known as the “blue period”. The most characteristic works of these years were ‘Old Guitarist’, ‘Evocation’ (Casagemas’s funeral), or ‘Life’.

In 1904 Picasso decided to move permanently to the French capital, to the bohemian neighborhood of Montmartre. Picasso changed the blue of his past works, for shades of earth and pink. Thus, began his “pink period”. One of the “culprits” of this turn was precisely meeting his muse, model, and first wife, Fernande Olivier. From these years, works such as ‘Los dos hermanos’ or ‘La Familia de saltimbanquis’ stand out.

In 1906 Picasso created, without knowing it, one of the compositions that would conceive a new movement and its characteristic stamp: Cubism. This year he painted ‘The Ladies of Avignon’, putting Picasso at the top of the international painting scene.

A second determining moment in his life was the death of his wife, which caused him to abandon painting and move into other art forms such as sculpture, scenery, and costume design.

In 1935, just before the outbreak of the Civil War in Spain, Picasso had a daughter, the fruit of a new relationship. When the Civil War began, Picasso increased his political commitment, taking a position on the Republican side. It was then that he returned to painting and created one of his most important and universal works, ‘Guernica’. The absence of colors or figures in unnatural positions to tell the story of the bombing of the Basque population by the German air force in one of the most studied and admired works of all time.

After the end of the Spanish Civil War Picasso continued with his artistic concerns, creating during the following decades an infinite number of paintings, sculptures, drawings, engravings, illustrations, entering the Guinness Book of Records as the most prolific artist in History. He did not stop creating art in any of its forms until he died on April 8, 1973, at his home in Mougins (France) due to pulmonary edema.

His work transcends all kinds of frontiers and classifications; as vast and diversified as it is unique, it represented a before and after in artistic production worldwide. Controversial, with limitless talent and an insatiable need to create, his best-known phrase faithfully reflects his personality: “when inspiration comes, let me be at work”.