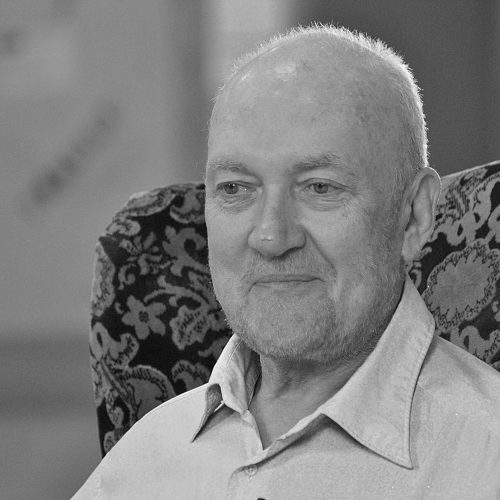 Sean Scully was born in Ireland in 1945 who migrated to London, where he spent his childhood. He studied painting at Croydon College of Art from 1965 to 1967 and at the University of Newcastle upon Tyne from 1967 to 1971. In 1972 Scully was awarded a Knox Fellowship to study art at Harvard University, and in 1975, based on the merit of his early paintings, Sully won a Harkness Fellowship, which allowed him to move permanently to New York.

After an initial figurative period of calligraphy, at the beginning of the seventies, he turned to abstraction, influenced by Pollock and the plastic clarity of Mondrian. During this time, he created grids in which the diagonal line still appears, through which he poses a reflection on the surface and depth in which the order and logic of the form predominate.

In 1975 he emigrated to the United States, where he taught at Princeton University. He exhibited at the Torutue Gallery in Santa Monica (1975) and at the Buffy-Gibbs in New York. In 1983 he was awarded a Guggenheim scholarship and in 1984 he received an artist’s grant from the National Endowment for the Arts.

The eighties for Scully were the years of the multi-panels, with dense brushstrokes and varied textures and colors, which represented a humanization, as opposed to formalist principles. Scully has chosen the “stripe” motif, which unifies all his work.

Scully is well-known for his abstracted geometric grid paintings, primarily rectangles, arranged on horizontal and vertical axes evoking architectural forms: he paints squares, stripes, geometric shapes. These abstractions are – he admits – the result of an artistic compulsion to reach the limit of things, the limit of the graphic, of his canvases, of life, perhaps. He defines himself as an extremist, and his motifs, which are limited and repetitive, bring us closer to the world of a Mark Rothko or a Bridget Riley, the painters who first inspired him. The beauty, the meaning of his work, lies in the irregularity of its grids and stripes, the unexpected imperfection of its lines, its defective and blurred straight lines that confront rationalism with dislocation.

Scully now divides his time between this Barcelona studio and his studios in New York and London.