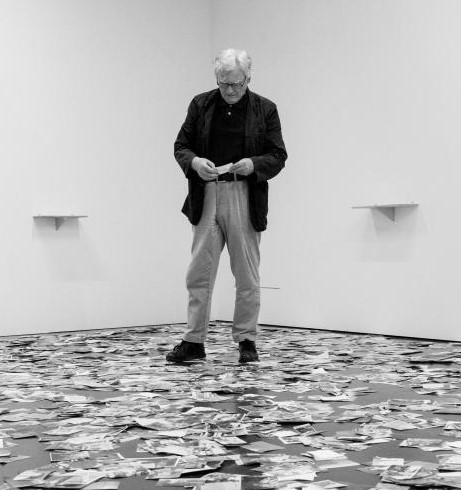 Dieter Hacker is a German painter born in August 4, 1942, in the city of Augsburg. Hacker studied at the Academy of Fine Arts in Munic, in the same class of Ernst Geitlinger, Gerhard von Graevenitz and Klaus Staudt. His work can be divided into 3 phases:

In the 1960s Hacker created analytical and kinetic works that were marked by the New Tendencies (New Tendencies (Nouvelles Tendances) movement: an avant-garde international group of artists that brought together Western and Eastern European and South American artists from the fields of Op Art, Kinetic Art and Light Art. The New Tendencies included, among others, members of the artists’ groups ZERO and Effekt from Germany, Grav from France, Gruppo N and Gruppo T from Italy and Exat 51 from Yugoslavia.

In the 1970s, he increasingly produced political and socio-critical installations.

In the 1980s, Hacker became famous as a painter in the context of the Junge Wilde (Neue Wilde or Neue Heftige), an art collective who came to public attention in the early 1980s in Germany and Austria with subjective, carefree, and life-affirming painting.

With his political works, and especially since 1971 with his concept of an artist-run gallery, Hacker made a radical departure from the art market. His self-designed exhibitions focused on the social relevance of art, the role of photography in everyday life, and the art market or the utopias of Constructivism.

From 1990 to October 2007 Hacker taught painting at the Berlin University of the Arts and in 2008, was accepted into the Ingolstadt Foundation for Concrete Art and Design.

For more than four decades, Hacker repeatedly dealt with the utopias, demands, and successes of Constructivism in very different artistic forms of expression, but also with its limits and the dangers of formalizing its means of design.