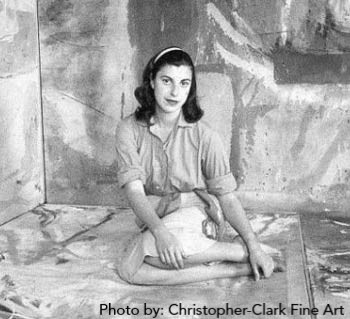 Helen Frankenthaler was an American abstract expressionist painter, influenced by Jackson Pollock and Willem de Kooning. The daughter of a New York State Supreme Court, Frankenthaler studied at Dalton School, where she was taught by Rufino Tamayo, and later at Bennington College in Vermont.

In 1950 she met influential art critic Clement Greenberg with whom she had a five-year relationship. Greenberg and Frankenthaler participated in the Abstract Art Movement that was developed between 1946 and 1960 and in 1964 she was part of the exhibition Post-Abstraction Painting, curated by Greenberg, forming a new generation of abstract painting that was known as “Color Field”.

Frankenthaler’s early works reflect a variety of influences, but after 1951 she developed a style of her own. Inspired by Jackson Pollock, creator of the dripping technique, which consists of splashing paint onto the canvas, Frankenthaler used highly diluted paint to soak or stain unprepared canvases, with which she created diaphanous lakes of soft colors, such as the delicate pinks and blues of ‘Mountains and Sea’ (1952), Frankenthaler’s most important work. Both this and later works, although abstract, contain clear evocations of landscape.

Frankenthaler began exhibiting her paintings in contemporary museums and galleries since the 1950s until 2011, the year of her death. Her first solo exhibition dates to 1951, at the Tibor Gallery in Nagy, New York. She was also included in the 9th Exhibition of Painting and Sculpture.

In the 1960s, she began leaving large areas of the canvas empty in many of her paintings, to allow (in her own words) the work to breathe. In 1962 she began using acrylic, which is brighter and less dense than oil, and as a result, the color of her canvases became stronger. In 1975 she made a series of paintings on ceramics in delicate tones.

Frankenthaler has had a major influence on such colorful American artists as Morris Louis and Kenneth Noland and has stand out as one of the greatest exponents of abstract expressionism.