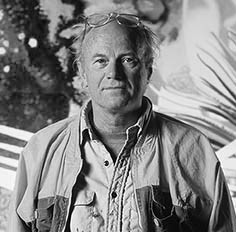 James Rosenquist was an American Pop artist known for his monumental paintings and prints inspired by the subject and style of modern commercial culture. By drawing elements from his background in sign painting, Rosenquist explored the role of advertising and consumer culture in art and society on his pieces. His montage-like works combine popular culture, Surrealism, and historical painting methods. His large canvases are a powerful comment on the dizzying omnipresence of the consumer world.

Rosenquist attended the University of Minnesota, before studying at the Art Students League in New York under the teachings of George Grosz, Morris Kantor, and Edwin Dickinson. His early career as a commercial sign painter ended in 1960, after witnessing two coworkers fall to their deaths from a scaffold. Focusing completely on his career, Rosenquist moved to a studio in Lower Manhattan, where he met other artists such as Ellsworth Kelly, Robert Indiana, Jasper Johns, Robert Rauschenberg, and Jack Youngerman.

Rosenquist developed his characteristic style based on the effect of using a billboard style of painting on smaller canvases, where the images became softly blurred and their literal quality was lost in the close-up orientation and the cropping of the image. Transitioning away from cultural references into the more abstract subject matter. Rosenquist also played with shifts in scale and technique—for example, employing grisaille and full color—and juxtaposed several disparate motifs in a single canvas. The completed painting would be a disjunctive display of various pop images that presaged the postmodern strategy of pastiche, as in the later work of David Salle.

Rosenquist received numerous honors, including being selected as “Art In America Young Talent USA” in 1963, an appointment to a six-year term on the Board of the National Council of the Arts in 1978, and receiving the Golden Plate Award from the American Academy of Achievement in 1988. In 2002, the Cristóbal Gabarrón Foundation conferred upon him its annual international award for art, in recognition of his contributions to universal culture.

He lived and worked between Aripeka, FL, and New York, NY. Rosenquist died on March 31, 2017, in New York, NY. His works are held in the collections of the Art Institute of Chicago, The Museum of Modern Art in New York, the National Gallery of Art in Washington, D.C., and the Tate Gallery in London.