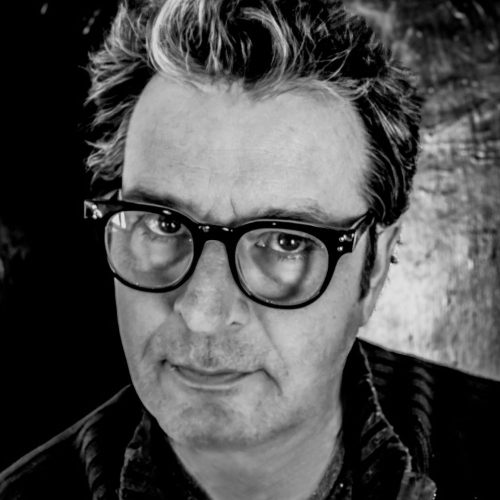 Jeff Robinson (born 1959, Summit, NJ) enrolled in the Kansas City Art Institute in 1979 to study sculpture under the tutelage of Dale Eldred and Jim Leedy.

After the rigors of academia, Robinson began to shift his focus from sculpture to painting, stating that “the change in medium suited my temperament. Painting allowed me to get to ideas quicker.” He stayed in Kansas City and partook of its burgeoning art scene at the Random Ranch and Left Bank galleries. From conventional subject matters -the figure- came unconventional work. One example of this is The Campfire Girls series. About this work, Robinson says he “liked to take things apart and put them back together again a little differently.”

Completing a decade of work in Kansas City, Robinson was ready to move back East. In 1992 he was living in New York City and painting at a prodigious rate. Figures took a backseat to flags of his own invention and a growing personal iconography, like keys, horses, bridges, or dogs, among others. The works were “adulations of symbols, odes on objects.” Building up a canvas in layers of paint and then coaxing an image from this rich surface, the work took on an almost sculptural quality. To add to the overt physicality, he would frequently cut and reassemble the canvas as he proceeded to its conclusion.

Within his first months in New York, he began exhibiting at the Meisner/SoHo gallery and continued to exhibit there over the next few years. In the mid-’90s Robinson was taking part in the rebirth of art in New York by involving himself in several group shows around the city, such as GenArt and Oracle. He also began exhibiting in other galleries, including the Project Room of the Jason McCoy Gallery on 57th St.

The design elements of the flags formed a new series inspired by a childhood favorite, Spirograph.

“Initially, I was exploring the subtleties of design, but I got caught up in the sculptural possibilities of it. I made a large 12:1 scale Spirograph machine out of wood which I used in the creation of the original Spiro series. It was important for me to go through the process of designing and making it if for no other reason than to bring me back to working three-dimensionally.”

The Shirt drawings and paintings were born of this restlessness with subject and material. As always, inspiration came from unexpected sources. The idea occurred to Robinson in NYC via a chance encounter with a friend who was on his way to Goodwill with a pile of clothes. Robinson saw “the shirt,” was struck by its graphic quality, put it on – added the one he had been wearing to the pile – and wore it home. So began the series, Same Shirt, Different Day.

In 1997 his love of literature and his proximity to the Strand Bookstore in Manhattan led to his current series, Libris. Initially, intimate paintings of stacked books were Jeff’s main passion, but this series has grown substantially over the ensuing years both in scale and content. Diptychs and triptychs of up to 15 feet are part of the portfolio as well as citing certain books by title. Everyday day is an adventure.

Jeff lives and works in the Roanoke neighborhood of Kansas City, Missouri, with his wife, author/illustrator Courtney Watkins, and daughter Mary Charles.