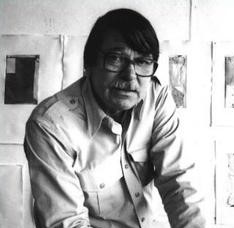 Richard Clifford Diebenkorn Jr. was born in April 1922 in Portland, Oregon. He was an influential 20th-century American painter whose work encompassed distinct aesthetic periods. Considered a quintessentially Californian artist, he is best remembered as a founding member of the Bay Area Figurative Movement, along with David Park and Elmer Bischoff. Daniel Mendelowitz encouraged his interest in such American artists as Arthur Dove, Charles Sheeler, and Edward Hopper. Mendelowitz also took his promising student to visit the home of Sarah Stein, sister-in-law of Gertrude Stein, where he saw works by Paul Cézanne, Pablo Picasso, and Henri Matisse.

Diebenkorn initially embraced abstraction, before making what a surprising change of direction to figuration in the mid-1950s, which would go on until the mid-1960s. He then returned to abstraction in the late 1960s and created his famous Ocean Park series, which, according to the Boston Globe, includes “some of the most beautiful works of art created in America or anywhere else since the Second World War”.

He was also prolific in the still life genre: some of his nearly monochromatic still life drawings are among the most distinctive, and enchanting, in the history of twentieth-century art. In 1980 and 1981, Diebenkorn temporarily changed directions, producing a rather eccentric group of works on paper known as the “Clubs and Spades” drawings. They were partially inspired by the artist’s lifelong interest in heraldic imagery, and their explorations of form would reappear in modified form at the very end of his life.

Diebenkorn definitively ended his figurative approach, to invent a unique abstract language he would develop until 1988. In the spring of 1988, he and his wife moved from Santa Monica to Healdsburg, California, to a rural home near the Russian River, overlooking vineyards and scrub-oak hillsides. In his Healdsburg studio, he worked on a mostly small scale, producing some of the most gem-like, quirkily decorative, and perfectly executed works of his life. Though he experienced serious health problems during much of his time in Healdsburg, he was able to continue his restless exploration of form and color and poetic metaphor. In late 1992, the Diebenkorn’s was forced to take up residence at their Berkeley apartment to be nearer to medical treatment. They looked forward to returning to Healdsburg but were never able to do so: Richard Diebenkorn died there on March 30, 1993.