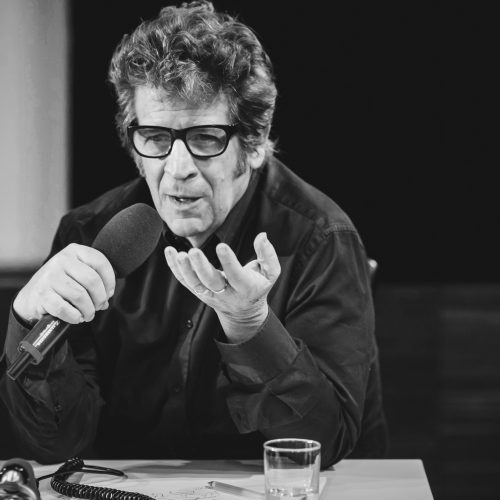 Robert Longo was born in 1953 in Brooklyn and grew up in Long Island, New York. He is an American artist, best known for his detailed photorealistic drawings of jumping figures, sharks, tigers, and guns. His monochrome series, ‘Men in the City’ is one of his most widely recognized works: Drawn in charcoal, graphite, and ink, it renders businessmen and women in a state of suspended animation and brought him critical acclaim in the early 1980s.

Longo’s works are remarkable for revamping charcoal into thick-textured surfaces, giving his velvety drawings deep, blackened expanses and sharply contrasting whites: his forms are at once representational and softly elusive.

In 1972, Longo received a grant to study restoration and art history in Florence, where he soon discovered that he wanted to make art rather than preserve it. In the fall of 1973, he enrolled as an art student at the State University College in Buffalo, graduating in 1975. During this time, he worked under experimental filmmakers Paul Sharits and Hollis Frampton, who introduced him to Sergei Eisenstein’s films and structural filmmaking. While at Buffalo, he also co-founded, with Charles Clough, the exhibition space ‘Hallwalls’ (Which opened in 1974 and is still open), where he organized shows and talks with artists such as Vito Acconci, John Baldessari, Lynda Benglis, Robert Irwin, Joan Jonas, Bruce Nauman, and Richard Serra, establishing an informal network that proved to be crucial to his development. It was at this time that his life-long friendship with Cindy Sherman began.

Longo moved to New York with Sherman in 1977 and started to work as a studio assistant to Vito Acconci and Dennis Oppenheim. That year, he also participated in a five-person show called ‘Pictures’— which was curated by Douglas Crimp at Artist’s Space in New York. This was the first exhibition to contextualize a young group of artists who were turning away from Minimalism and Conceptualism and towards image-making, inspired by newspapers, advertisements, film, and television. Over the next decade, Longo became known as a leading protagonist of the “Pictures Generation,” working on different mediums such as drawing, photography, painting, sculpture, performance, and film, to make provocative critiques of the anesthetizing and seductive effects of capitalism, mediatized wars, and the cult of history in the US.

At the turn of the millennium, events such as 9/11 in 2001, and the Iraq War in 2003, profoundly affected Longo’s outlook on the world, just as the Vietnam War and Civil Rights movement had in his youth. From 1999–2008, focusing exclusively on charcoal as a medium, the artist embarked on a cycle of works entitled The Essentials which is Longo’s version of the creation myth, or Genesis.

Over the years he has continued to work in artistic creation cycles and, in parallel, Longo has continued to engage with art history through various works he collectively calls ‘Forensic Distance’. Since 2006 he has explored how artists have depicted the times in which they live through producing small graphite drawings that showcase famous historical works in intimate, monochromatic detail: These drawings were called ‘The Heritage Drawings’. In 2014, he produced a body of work that focused on the output of the Abstract Expressionists, as well as a monumental re-reading of Picasso’s Guernica: Untitled (Guernica Redacted, After Picasso’s Guernica, 1937).

Since 2015 he has embarked on a series called ‘Hungry Ghosts’, which are drawings based on X-rays of famous paintings from transparencies kept by conservation departments of major museums such as the Louvre in Paris, the Museum of Modern Art in New York, and most recently the Courtauld Institute of Art in London. Through these, Longo looks to show the “truth” of an image beyond its surface appearance and hone his inquiry into revealing invisible layers of meaning.