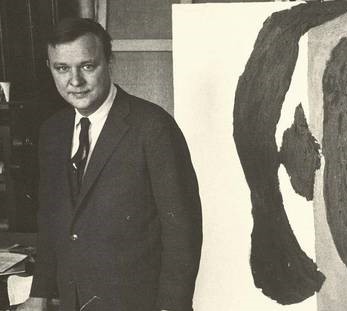 Robert Motherwell was an American painter and a leading figure of the abstract expressionism movement. He was one of the youngest members of the so-called New York School, which also included Jackson Pollock, Mark Rothko, and Willem de Kooning.

Motherwell was born on January 24, 1915, in Aberdeen, Washington. In 1932 he went to study philosophy and modern French literature at Stanford University, where he showed a special interest in the work of American pragmatic philosophers such as John Dewey and Alfred North Whitehead; at the same time, he studies painting at the California School of Fine Arts in San Francisco.

In 1941 he left his studies of literature and psychology to start painting, influenced by the Surrealists, and particularly by the Chilean painter Roberto Matta, with whom he traveled to Mexico. Together, with Baziotes, Newman, and Rothko, Motherwell founded the Subjects of the Artist school in New York, in 1948.

Motherwell is recognized for using the hardness of black paint as a basic element. One of his best-known techniques was to dilute the paint with turpentine to create a shadow effect. His extensive series of paintings known as “Elegies to the Spanish Republic” is generally considered his most significant work.

The Museum of Modern Art in Fort Worth houses Motherwell’s largest collection of works. Some of his works can also be found at the Empire State Plaza. The Walker Art Center has an almost exhaustive collection of his prints.