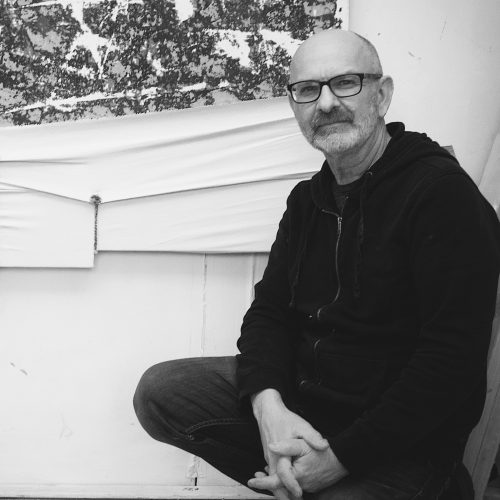 The intent of my work is to create a new spatial experience that transcends the formal structure of painting and explores the mysterious conflict between the tangible and intangible.

Vincent Serbin is a New York-based artist currently living and working in the Catskills. His latest series of canvas works explore a new medium and technique for the artist, whose career began by developing a unique method of photomontage (what he calls the “negative collage”). Though spanning decades, for the last 12 years, Serbin has dedicated his practice to an approach that investigates the materiality of the medium. Influenced by the avant-garde strategies of artists such as Robert Ryman, Alberto Burri, and Frank Stella, Serbin is interested in the process of art than in its material realization.

The series of works on exhibition at the Gallery are a continuation of this development, wherein the artist has painted abstract canvases of varying sizes and shapes that are then covered over. Ropes and twine pull at the edges and folds, making the covering take on an almost skin-like aesthetic. This process of concealing and revealing is described by the artist as an “evolutionary adventure.” Having started his career in photographic collage (wherein he had to literally cut and reform his photographs), this collection appears to be a progression from that, giving the corporeal effect of the canvas that conceals and reveals various aspects of the painting behind it, as if these spaces are incisions in the skin of the canvas itself.

However, the process of Serbin’s work may be even further thought of as indicative of the experience of the artist as a creator himself. In the creation of art there is always a giving and taking of oneself. The artist’s work lays bare an expression of the self for public viewing. Yet, it is not the full self, only an aspect that the artist desires one to see. It is a game that the artist plays with his works: at once devoted fully to their execution, but understanding the distance between their materialization and his own identity.

Constructed from acrylic, canvas, and other media, Serbin has developed a consistent body of work that displays a progression of thought. Behind each work is a detailed catalog of the media used. What once served as a reference point for the artist becomes an almost catalog of process for the collection as a whole.

Serbin has exhibited extensively around the US including recent exhibitions at the University of Texas and at Pirate Contemporary Art in Denver. His photo works have been widely exhibited and collected by private individuals and institutions such as The Museum of Photographic Arts, The University of Maine Art Museum and the Museet for Fotokunst, in Denmark. He is currently represented by the Fernando Luis Alvarez Gallery.